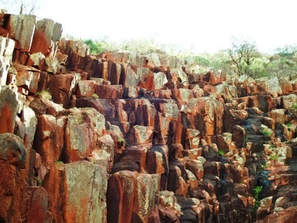 A perfect destination a one-day excursion, the Gawler Ranges National Park provides a safe and natural habitat for an abundance of native wildlife and vegetation. The Park encompasses what was known as Paney Station, and portions of Pine Lodge and Scrubby Peak stations. The park provides fantastic opportunities for sightseeing, photography and touring by 4WD.

The ranges were formed by volcanic activity nearly 1.5 billion years ago, the volcanic activity resulted in a lava field, rather than volcanoes. The highest point is Nukey Bluff at 465 m above sea level. After heavy rainfall the famous Organ Pipes (pictured right) or Kolay Mirica Falls may be running with water.

The park is home to 164 fauna species including the rare and elusive Yellow Footed Rock Wallaby. Euro kangaroos can be seen casually grazing at the foot of the hills. The park is also home to 140 species of birds including the Wedge Tailed Eagle, who, with a wingspan of up to 2.27 metres, may be seen hovering for prey. Renowned for its wildflower display in the Spring, the best time to visit is between April and October, this is also while the weather is cool.
​
The ranges are located approximately five and a half hours drive north-west of Adelaide on the central Eyre Peninsula region. Located 40 km north of Wudinna and 40 km north-east of Minnipa, access to the Park is available through Wudinna, Minnipa and Kimba. Most tracks within the Park are recommended for high clearance 4WD vehicles only. However, high ground 2WD vehicles may access some areas. Check road conditions before travelling in wet conditions. 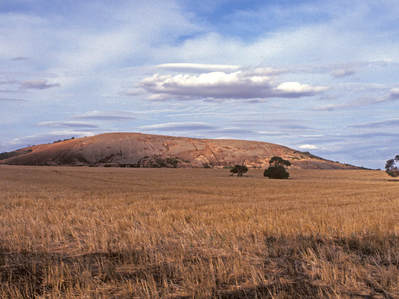 Mount Wudinna is one of Australia's largest granite monoliths. A trip to the district would not be complete without visiting this impressive natural rock formation. Located a convenient 10 kilometres off the National Highway One, access to the attraction is through the town of Wudinna. The roads are well sign-posted and suitable for travel by car. When you get there you will find a recently developed Interpretive Trail. The trail provides a pleasant picturesque walk and an abundance of information about the rock, its history, formation and local flora.

At the base of Mt Wudinna you will find several picnic sites with barbecue facilities, a parking area, toilets and an architecturally designed shelter, also with barbecue facilities.  A walk to the top of Mt Wudinna can take only a matter of minutes and you don't need to be an Olympic athlete to complete this feat. The walk is definitely worth it as the views from 261 metres above ground level are spectacular and span many miles around 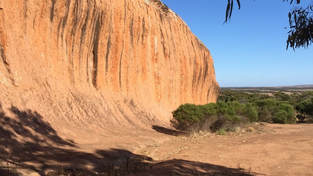 Pildappa Rock is an impressive granite outcrop well worth a visit. Located a convenient 15 kilometres off National Highway One, access to the attraction is through the town of Minnipa. Visit the rock and you will find wave formations that rival the famous 'Wave Rock' in Western Australia.
​
With a shelter, picnic, toilet and barbecue facilities available they make the attraction a popular picnic spot among locals and visitors. A walking/drive trail circumnavigates the rock. Climb the rock and you will find superb views of the Gawler Ranges and the Blue Sturts.

​Polda Rock Recreation Reserve is located just 7 kilometres east of Wudinna. There are shelter, barbecue and toilet facilities, and a walking trail follows the circumference of the Rock. The Rock itself has heritage significance, from its use as a water supply for the township of Wudinna in the early settlement days. In 2002 the local Council restored Polda's water supply infrastructure and laid new pipes from Polda into Wudinna. This water is collected and used on parklands, ovals and sporting facilities in the Wudinna township. It provides a popular picnic spot with locals and visitors, access to the rock is free and well worth a visit. Little Mount Wudinna is also contained within the reserve and is connected to the Polda Water Scheme. 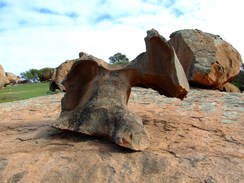 ​
​Tcharkulda Rock is a massive outcrop covered in the largest and most spectacular tafoni (small cave-like features) and boulders in the district. In winter the base of the tafoni are alive with the pink flowered rock crassula.
​
The area is a well used picnic area and provides a beautiful setting for a family outing. On the grounds the local Kiwanis group have restored a Shepherd's Hut, as a reminder of the solitary existence of the early pastoralists in the area.

Wudinna is the largest town in the Wudinna District Council area, with a population of approximately 450 people. The district population is approximately 1200.  Established in 1925 the council area consists of Warramboo, Kyancutta, Wudinna, Pygery, Yaninee and Minnipa. Recent development of commercial enterprises in the town of Wudinna confirms the commitment of local businesses to provide great products and services.

A bike/walking trail has been constructed that runs from Wudinna to Polda Rock Recreation Reserve. The trail is approximately 7 kilometres long so don't forget your hat, sunscreen and water! In town, the Gawler Ranges Cultural Centre is home to local artists who welcome visitors as they work on projects.
​
Home to some of the most spectacular granite outcrops in the Eyre Peninsula, there are so many great places to explore on the Wudinna and Minnipa Granite Trails including Turtle Rock, Ucontitchie Hill, Corrobinnie Hill, Pygery Rocks and Waddikee Rock. 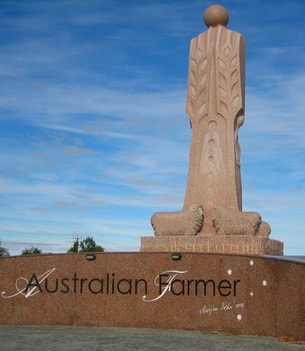 ​The Australian Farmer is a statue located in Wudinna. The Granite Sculpture stands at 8 metres (26ft) in height and weighs in the vicinity of 70 tonnes. The stylised work of  farmer represents the early settlers of the region, with carvings symbolising grain and sheep found within the sculpture.

It took 17 years from initial proposal to the final unveiling in 2009. The project was run by the Community Directions Group, with Council supporting the concept. The artist, Marijan Bekic, arrived in late April 2007, with his son David. Work continued throughout the 2008/09 financial year, with the official gala opening held on 17 April 2009 with a large crowd in attendance.

The sculpture and the work around it created national media attention. A DVD has been prepared documenting the progress on the sculpture and simultaneously a freelance media crew documented several stories about Wudinna and its surrounds for international release.